“BLANK: A Provocation for 3 Rolls of Paper and a Performer” took place in the framework of an exhibition, curated by Andrėja Šaltytė, along with her and Gabrielė Gervickaitė, in a cozy white Bükü – Büro für kulturelle Übersetzungen – in Leipzig, DE.

It lasted three days for three + hours each time, and was basically a session of automatic writing which I did on an old Olympia typewriter, a beautiful but rather painful tool to use for writing, as some of the letters were too loose and some too stiff, and all in all it felt worse than a three hour piano lesson.

It took place on those same days as the shootings in Paris, the reflections of which also found place on one of the rolls I was typing on : I could not not react, not only because some people I hold dear live in that city. Involved in the meditation on pain, bodily presence in the space and imperceptible being, as well as disappearing while being still, somehow connected thereto. Thought I’d say oh so much about it all, but it all comes down to pain and anger. And all of it was also in the text that was coming out, words instead of tears and blood and sweat and spit.

Anyhow, a nice text by Jenna Jauhiainen is written about the whole of the exhibition and the possible points of entry.

Start of the performance

Audience in the opening

Audience in the opening 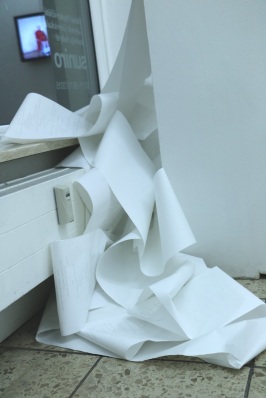 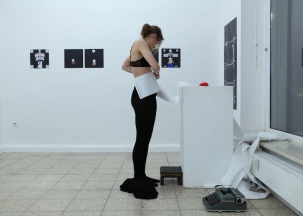 Becoming a body of text

A body of text 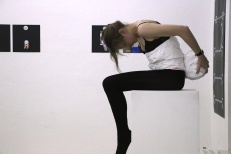 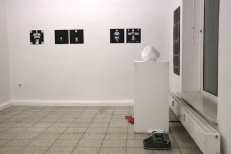