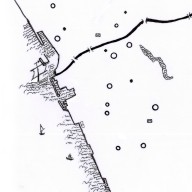 NAPATUM is an online/offline game, which might be played only in relation to the physical space.

A Player has to print out the map of the Napatum city, situated five centuries ahead of our time, which now is known as Klaipėda, a port – city in Lithuania. According to the printed plan and the map of the actual Klaipėda city, Player must find the real objects with the codes on them. To make the research easier, every check point in the virtual version of the map, upon clicking it, shows the picture of the object, which hosts the code.

After entering the adequate code into the adequate number box, the Player can read the whole short story about the Napatum city, its inhabitants, the nature and the social structure etc.

The aim of this project was to reflect on the present and imagine the possible future of the physical space which we tend to perceive as something immutable and immune to the passing of time, though the physical bodies are actually those that decay fastest. On the other hand it was also a try to establish a new and different relationship with the space and perceive it not only in its three-dimensional modality, but more of an emotional space with a dimension of time.

The project was created during the residency period in Klaipėda Culture and Communication Centre (KKKC), September 2012.

During the same period a few short stories were written as well to capture the general ambience of the city and to reflect my relations to the inhabitants of the port.